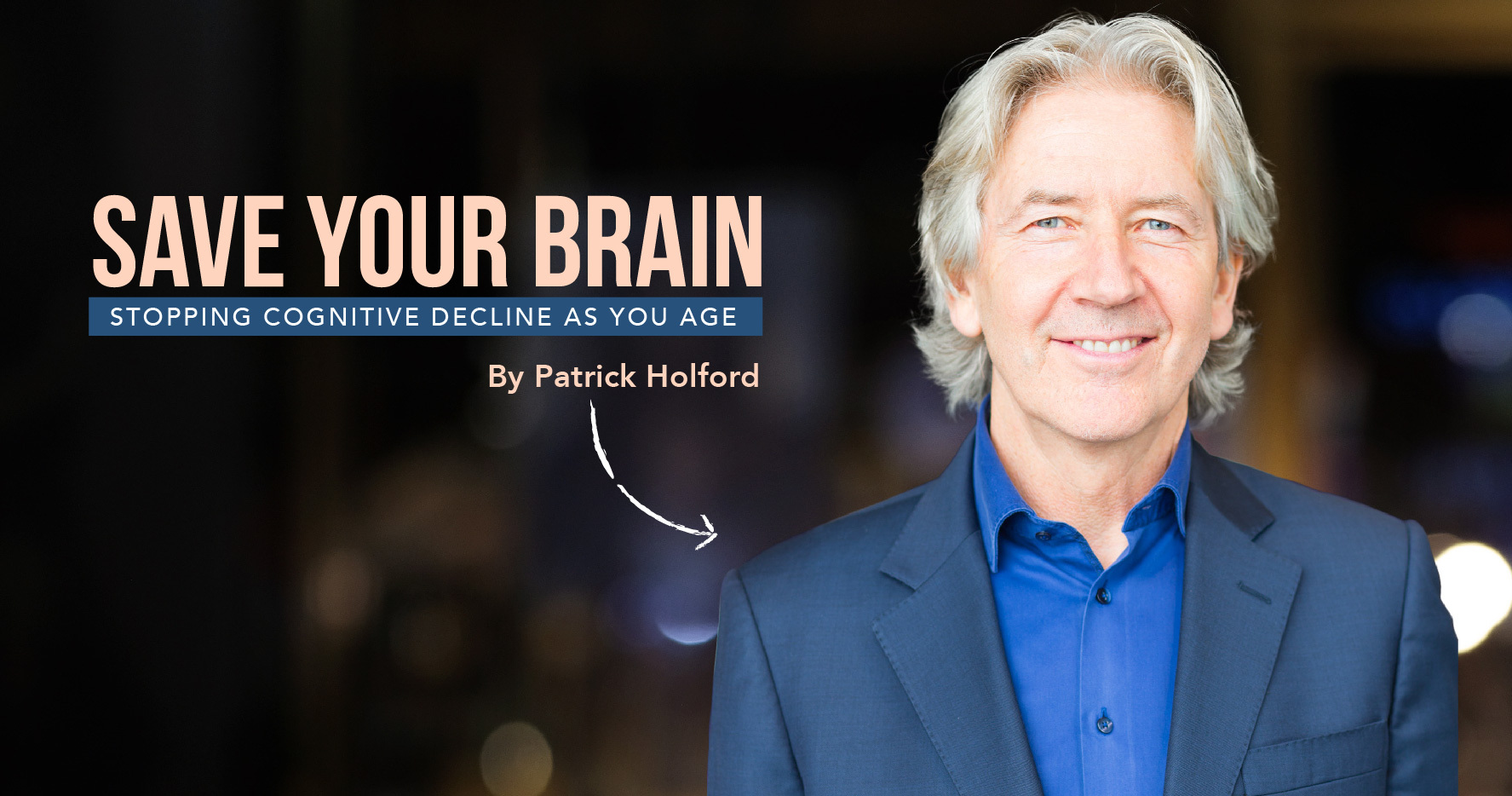 Save Your Brain with 5 Easy Steps

Think about it. Your ability to think clearly, make good decisions, adapt to inevitable challenges and not go into confusion is probably the one function that’s going to make the biggest difference in your life right now. Then, later in life, you will have seen relatives going down the slippery slope of cognitive decline curtailing their ability to function and causing increasing suffering and leading to a diagnosis of dementia or Alzheimer’s.

Statistically one in three born this century will develop dementia, and the process of neuronal decline starts in the 50’s although is barely visible without advanced scans and experienced only as a slight slippage in memory and loss of mental acuity.

So, whatever age you are now is the time to take on board my ABCDE Action Plan for keeping your brain sharp. Here’s the essence of how it works so we have a context for looking at the evidence.

Your brain is made of neurons (brain cells) which send and receive electrical signals and glial cells which support neurons. You’ve got in the region of 80 billion of each in your brain. Then need fuel – either glucose or ketones; antioxidants to clean up their ‘oxidant’ exhaust fumes; and a healthy intelligent lipid(fat) membrane which is made of essential omega-3 fats (DHA) binding to phospholipids (mainly choline) the binding of which is done by methylation, dependent on B vitamins. Both neurons and glial cells have vitamin D receptors, the sun-made hormone that both helps control gene expression and inflammation in the brain.

A – is for antioxidants

B – is for B vitamins that are essential for healthy methylation

C – is both for choline, the main phospholipid in your brain; and low carb diets

D – is both for vitamin D and DHA, the brain critical omega-3 fat

Tick these five boxes and the odds of your memory and cognition getting worse are very small, possibly non-existent. We will go through these in order

Given that cognitive decline starts, for many in their 50’s but without any clear symptoms, it’s good to establish your memory status with a free 15 minute Cognitive Function Test. This is offered by www.foodforthebrain.org and both gives you a score arranged across a green, orange, red scale and a free report highlighting which of the above are likely to be most important for you. It’s especially worth doing if you’re over 50.

Many people have told me they didn’t do it because ‘they’d rather not know’ but that’s unwise because, unlike other diseases such as diabetes, that are reversible, dementia and especially Alzheimer’s which accounts for 2/3rds of dementia diagnoses, is not reversible but is preventable so the sooner you know where you’re at and what to do about it the better. Especially since, in the early stages of cognitive decline people pursue this kind of strategy to regain mental acuity and memory.

Here’s the actions to take:

The older you get the more antioxidants you need. Many ‘polyphenol’ rich foods from blueberries to broccoli are potent antioxidants. The best way to optimise these is to eat a multi-coloured diet with lots of greens, berries, beetroot, turmeric, mustard, cinnamon and other spices and herbs.

But just eating these foods, especially later in life, doesn’t give your brain full protection from oxidative damage. That is why I both recommend, and take myself, a daily AGE Antioxidant formula containing all the nutrients mentioned above. Glutathione and alpha-lipoic acid are especially important, as is vitamin C. You won’t get enough vitamin C is an all-round antioxidant formula as optimal levels of 1-2g a day is a whole pill or two in its own right so this is worth taking separately.

B for B vitamins

One of the best predictors of cognitive decline is a blood test for homocysteine. Homocysteine levels in the blood increase if your methylation ability is under par. Methylation is absolutely critical for keeping neurons healthy, building neuronal membranes. Almost a quarter (22%) of the risk for Alzheimer’s is attributed to raised homocysteine and/or lack of B vitamins, according to research at the US National Institutes of Health.

B vitamins, especially B6, folate and B12, are vital for methylation. Vitamin B2 and B3(niacin) have a lesser role to play. Zinc and TMG (tri-methyl glycine) also lower homocysteine. All these would be included in a homocysteine lowering formula. Do you need this? Not necessarily. Younger and healthy people are probably protected sufficiently with the level of B vitamins in a good ‘optimum nutrition’ multivitamin but if you’re homocysteine level is above 11 you need much higher doses. That’s why homocysteine lowering formulas contain 500mcg of B12 while a good multi would provide 10mcg which is already four times higher than the RDA of 2.5mcg.

If you are experiencing any cognitive issues or concerns or don’t score as well as you’d like on the Cognitive Function Test I strongly recommend you get your blood homocysteine level measured.

C for Choline and a Low Carb Diet

Almost two thirds of the dry weight of the brain is made out of fats. These include omega-3 fats, cholesterol and phospholipids. Phospholipids are the major player with strange sounding names all beginning with phosphatidyl…choline, serine, inositol, dimethylaminoethanol etc. They are a family and can be made from each other. The most important one is phosphatidyl choline, followed by phosphatidyl serine. They are very rich in eggs and fish. I make a point to eat six eggs a week and have three servings of fish, but I also supplement extra phospholipids in a Brain Food supplement (this also has added ‘methylation’ B vitamins).

Neurons can run on either a stable supply of glucose or ketones, which are made in the liver from fat, for example when you’re fasting or burning off body fat. Eating too many carbs disturbs blood sugar balance and that’s why dementia has been called ‘type-3 diabetes’.

Eating a low GL diet is so important. But there’s another kind of low GL diet which effectively switches out carbs for fat – often called a Low Carb High Fat (LCHF) diet. That works too. The interesting discovery is neurons actually prefer ketones to glucose as fuel if given the choice and ketones are most directly made from a type of fat called C8 oil. A study in Canada gave two tablespoons a day to people with cognitive decline and showed that, not only did their cognition improve, but that brain cells effectively came back to life, making more energy from ketones.

D for Vitamin D and DHA

One of the hottest new frontiers in the brain is the role of vitamin D, which both seems to control inflammation and also switch genes into healthy settings. The state of knowledge is such that having a low vitamin D level, e.g. below 50nmol/l, is clearly associated with increased dementia risk but does having a higher level, or supplementation, actually improve cognition?

A study in 2017 answered this question. The researchers took people with a vitamin D level below 100nmol/l, averaging about 60nmol/l which is, quite frankly, higher than you’d find in the average person in the UK. They were then given either a low dose (400iu) or a high dose (4,000iu) vitamin D supplement in this randomised placebo controlled trial.(2) The blood levels of those in the low dose vitamin D group went up to a healthy 86nmol/l while the level of those in the high dose group went up to 131nmol/l. The authors conclude: “Nonverbal (visual) memory seems to benefit from higher doses of vitamin D supplementation, particularly among those who are insufficient (<75nmol/L) at baseline, while verbal memory and other cognitive domains do not.” Verbal memory is much more subject to learning and less relevant when looking at biological effects. Multivitamins, for example, raise non-verbal IQ but not verbal IQ.

The study suggests that a) you want to have a blood level of vitamin D above 75nmol/l and that 400iu (10mcg) is not enough. The optimal intake is probably between 1,000iu(25mcg) and 4,000iu(100mcg) although I suspect 4,000iu is unnecessarily high on a long-term basis unless you are experiencing cognitive decline.

D is also for the omega-3 fat DHA which has ever-increasing evidence to be protective of declining cognition. One of the most impressive studies gave sixty five healthy 50-75 year olds 2.2g a day of omega 3 fish oils for 26 weeks.(3) Not only was there was a significant increase in executive functions but also scans revealed beneficial structural changes in white matter integrity and grey matter volume. Improvements in executive function correlated with red cell omega 3 status. While other studies have shown improvements in those with cognitive decline this study shows a beneficial effect is healthy older people.

E is for Exercise for both mind and body

The level of physical fitness, education standard and intellectual activity are three well established risk factors for cognitive decline. Fitter people have better minds. So building in daily exercise into your lifestyle is very important especially as you get older. So too is learning new things. One of the best mind protectors is learning a new language or skill. So, it is good to keep giving yourself mental challenges to keep learning and protect your brain from decay.

If you put all these factors together the chances are you’ll prevent any significant decline in cognitive abilities and take a big step towards dementia-proofing yourself. My mentors, such as the late Dr Linus Pauling and Abram Hoffer, lived well into their 90’s and were mentally as sharper as a razor right up to the last weeks of their life. I intend the same for myself and wish this for you too.

Patrick Holford, BSc, DipION, FBANT, NTCRP, is a pioneer in new approaches to health and nutrition. He is a leading spokesman on nutrition in the media, specialising in the field of mental health. He is the author of 37 books, translated into over 30 languages and selling millions of copies worldwide, including The Optimum Nutrition Bible, The Low GL-Diet Bible, Optimum Nutrition for the Mind and The 10 Secrets of 100% Healthy People, 10 Secrets of Healthy Ageing and Good Medicine.